What YOU allow, is what will continue !

I survived the Lebanese Civil War, and today, that dark episode is leaving in my heart a bitter taste of a terrible waste and in my mind a set of unanswered questions: why that started? Why it was allowed to continue? Why is there no end date?! why neither reconciliation nor Justice showed up? why our childhood was spoiled? And why that horrible story has no Moral?

I am not here to explain to you what we Lebanese have done to ourselves. I cannot explain it because I don’t understand it! If the Lebanese history would have a Q&A session, I would very probably join the Questions rather than the Answers. Still, for sake of awareness let us try to grasp some of the reasons behind our tragedy.

When analyzing the Lebanese civil war, there is a temptation to emphasize selected root causes, such as the spill-over of international conflicts, and a mysterious “مؤامرة” (conspiracy)… While for strange reasons, we tend to overlook the inherent attributes characterizing Lebanon and the Lebanese.

If there is a serious intention to learn from the past and avoid the reoccurrence of our failures (2005 and 2008 events being a clear warning), we better focus first on what we could control: our inherent deficiencies. Which could be classified into two main groups: 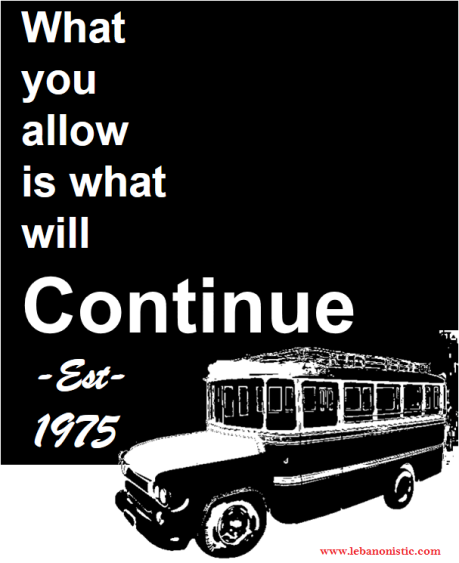 From psycho-social perspective, the distribution of wealth within and between groups has remained highly unequal, with the addition of a new bourgeoisie made of “former” militia leaders and their associate thugs who are seeking investment opportunities for the illicit gains they had made during the Civil War. Together with feudal figures, these warlords hijacked the governance and abusively used the “service ministries” as patronage sources (e.g. education, health, energy, or regional reconstruction funds) inhibiting any reform or progress initiatives which is aggravating the isolation and poverty of entire regions.
The “عميل bogey” – under diverse terminologies – is still trendy and was fixed by war-time alliances as supporting evidence. Saying that, if the complaining group is not associated with civil war (such as social movements) a ready to use “western bogey” is available to their sensors.

Worth noting, that a third factor was amplified in the psycho-social group being Fatalism. This means that individuals resign themselves to the social conditions in which they find themselves, and consider them inevitable and unsolvable, either because they see it as a result of “God’s will” or because of a strong belief in the inability of change. This results from the combination of the situation’s obvious stagnation, almost after 28 years from hostilities’ end, which crushed the population’s remaining hope. And from  the strong promotion of a submissive mindset by a passive and accomplice media, educational and religious establishment. How many times did you hear: “change! it’s impossible”, “it will always be the same”, “stop dreaming”, “Lebanese do not deserve better” etc.  Consequently, despite the war bitter outcomes and obvious abuse of power that followed, citizens are unaware of their human dignity and rights. They are unwilling to act, and thereby become indirect supporters of those who joyfully benefit from the status quo.

From structural perspective, the country is still maintaining its institutionalized sectarian system, dividing citizens into several sects. Sincere reconciliation was never experienced  and sectarian violence perpetrated during the Civil War provides an arsenal of “memories” that fossilized the population’s fragmentation and offered to sectarian/feudal leaders an emotional asset they can mobilize at moments of political turmoil to maintain their supremacy.

In a region were tensions are rising, Lebanese have failed to learn from their civil war to reform their regime, to refresh their political strata and to engage onto the path of a modern state. They instead left the war-torn keys of their destiny in the blood-stained hands of their almighty, all-knowing, powerful war horses and feudal leaders, hoping that those who excelled in wiping out souls and stones will be the genius architects of their future!

*: Lebanon is the only country commemorating its civil war start date (14 April 75) and having no end date. While all countries that experienced war, commemorate the end date… curious!

– Spiral of Violence, by Helder Camara
– Pity the Nation, by Robert Fisk
– The Tragedy of Lebanon, by Jonathan Randal
– The Lebanese connection: corruption , civil war and the international drug traffic, by Jonathan Marshall
– Israel’s Lebanon War, By Schiff and Yaari

View all posts by TʜɘScribɘ